Get all the details on the Registration page.

I’m pleased to announce that registration is open for the 2018 Alaska Endurance Trail Run.

After making a number of changes last year, as a result of feedback for the inaugural race, we’re going to largely keep the format similar to last year. Everyone seemed to enjoy it, so we’ll go with what works.

One small change we’ll make will be to simplify your choices a bit at the primary aid station, while still having plenty of variety.

Prices are staying pretty much the same as last year (which we reduced substantially from the inaugural year), with one exception: We’ve added a third, slightly more expensive tier for those who register the last couple of weeks. So register early, and lock in last year’s prices!

Check out the Registration page for all the details.

Thanks, and see you on the trails!

I’m pleased to announce that registration is open for the 2017 Alaska Endurance Trail Run. Thanks to your feedback and great ideas, we’re making some changes that we hope are going to make the race even more fun than last year.

Among other things, we’re adding the oft-requested 24-hour run, starting Friday night at 8PM. Prices are lower than last year. You’ll have your choice of directions to run the large loops, making the race more social (and requiring even more of a collaboration with the timers to make sure all the loops are recorded!).

Check out the Registration page for all the details.

Thanks, and see you on the trails!

I’m happy that you all validated some of the ideas behind the race, while providing great feedback about what we did right and wrong. I also learned that I’m a bit rusty in my survey-building skills!

Here at last is the promised summary of the results. I provide only a summary of the salient points made in the comments to not go on too long here. But I really appreciate all the nice things many of you said. Which proves yet again, that the major reason this year was such a great event was, because of the great people, both runners and volunteers.

Q1: The first weekend of June is pretty early in the summer running season for an ultra. Does that fit into your training and race schedule? Or would you prefer to move the date? 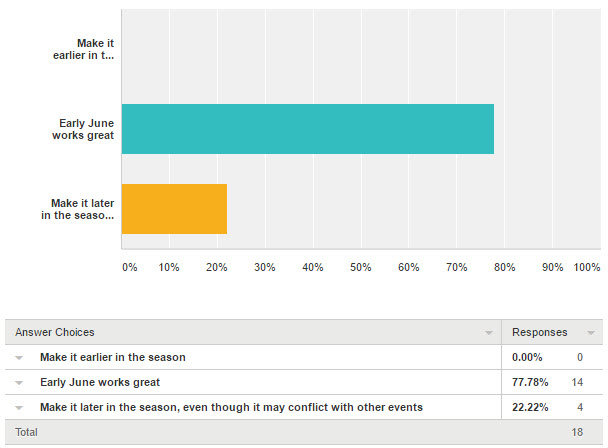 This is reassuring, for the most part. Scheduling running events in Interior Alaska is a challenge because there there are so many great events. In particular, I didn’t want to step on the toes of George Berry’s Dusk to Dawn Run closer to Solstice, nor the Angel Creek 50 Miler in July that is turning into a great destination race. So there aren’t many great dates that don’t impinge on those events.

I know a number of the runners this year used this event as a training race for events later in the summer, and the result here seem to validate that.

Our scheduling is dependent on UAF, but it looks like we’ll stick to early June for the time being. The one caveat here is the potential 24-hour race; more on that below at that question.

The comments mostly emphasized the above conclusions.

Q2: Did you like the UAF West Ridge Trails as the event venue? Or should we look for a different venue next year? 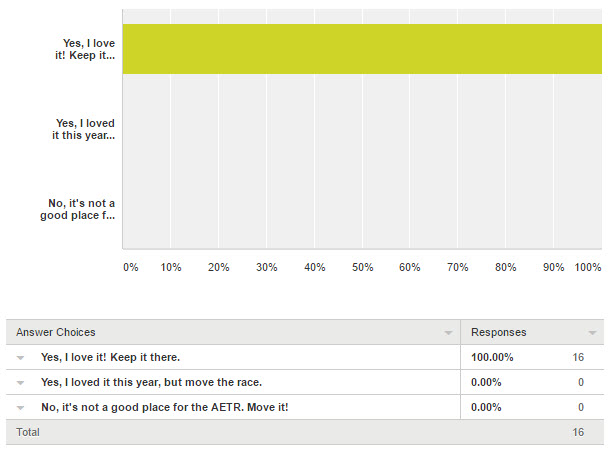 Message received! We’ll keep it at the UAF West Ridge as long as they’ll have us.

The comments mostly raved about the trails, reinforcing just how fortunate we are in Fairbanks to have the West Ridge both for summer and winter activities.

Q3: This years long loop was about 6 miles, which is quite a bit longer than what is typical for a timed run. Should we change the length? 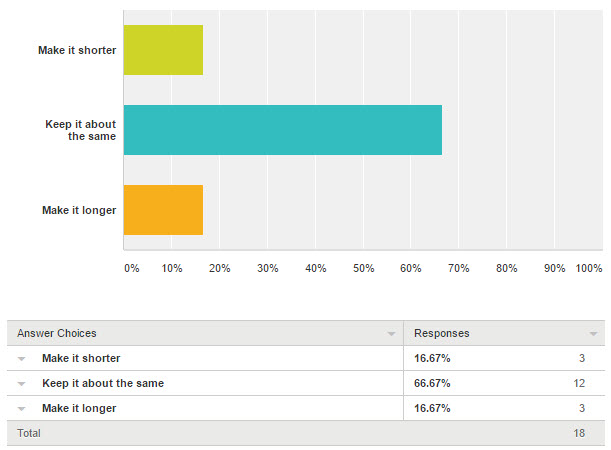 This one surprised me a bit. I was leery of a 6-ish mile loop, since events like this in the Lower 48 tend to be much shorter loops, around a mile or two. And some do them on the track, but we won’t go there! A shorter loop has you visiting the main aid station more frequently, eliminating the need for a water-only aid station, and probably saving all but the most constant energy drink sippers from having to carry anything.

The comments mostly reinforced that the length was good, particularly since at a 10-minute pace it took an hour to make it around. Most people felt like the 6-mile loop kept them engaged without being too repetitive. From the comments:

So the consensus is 6 miles (and a half mile). But some food for thought.

Q4: The Skarland trail on the UAF Web Ridge is fairly hilly, but not extreme. Should the course be more or less hilly, or was it good? 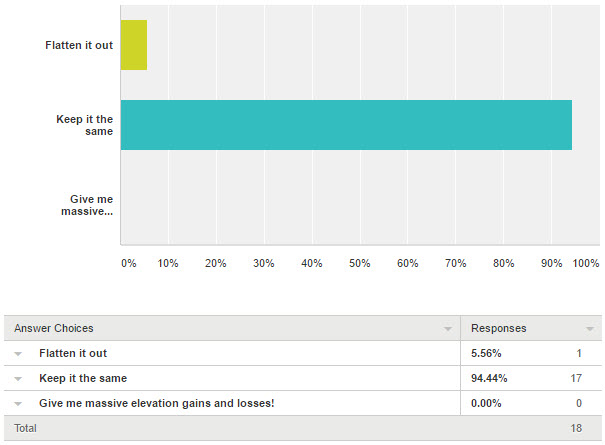 Okay, you have spoken loudly and clearly, between this and Q3! I was fairly confident that most people wouldn’t consider the hills to be extreme, but wasn’t sure if over the course of the day it would be too much.

Most of the comments said that the amount of vertical was good, with a couple saying a bit flatter and a couple saying more hills. I’m not sure how we could make it flatter (maybe by skipping the cut over into the Potato Field). But we could certainly make it hillier by adding Big Whizzy or Midnight Express or the like, but that would add considerable distance to the large loop. I had also run a few other small changes by a couple of people who nixed them, so I think the trail will be the same in 2017 since most people were happy with them.

One commenter suggested allowing the loops to be run in either direction, and I’ve heard that from a few other people as well. So that is something we’re considering. I think that will add to the social nature of the event, since you’re more likely to see a few more people over the course of the day. But most people will have plenty of solitude mixed in, so I think everyone will be well served.

Q5: Should we add a 24 hour race? Would you enter it in the next year or two if we did? 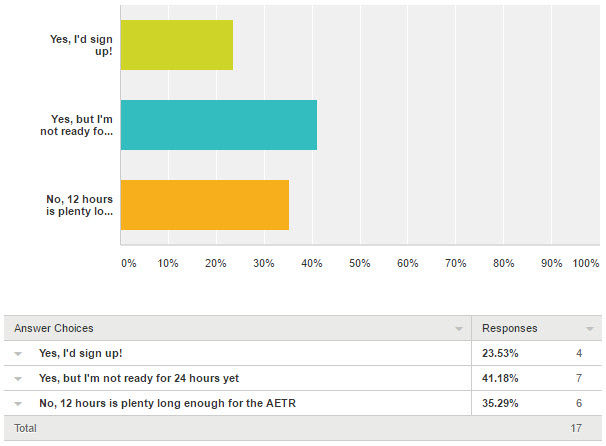 This one ended up being an interesting set of results. One the one hand, each response was fairly evenly split between respondents. But the yeses dominated, with about 65%. On the other hand, people who would only be inclined to do a 24-hour race didn’t respond, since they didn’t participate in 2016 and so didn’t do the survey. So overall, I think there is strong interest in a 24-hour race. One thing I was concerned about was volunteer support for those extra 12 hours, particularly since those hours will be overnight. But I’ve gotten a good initial response for help, so that makes it feasible.

In the comments, people were varied quite a bit, mostly positive about the 24-hour race, whether or not they’d be interested in it, and a few saying that it would make more people interested in the event. One commenter said that it seems like 24-hours would be too long for a 6-mile course, but I think that is countered by the number of 24-hour races on much shorter courses, including tracks. Interestingly, a couple of people said it might encourage them to move to the 12-hour race from the 6 this year.

So, in 2017 we’ll do a 24-hour race! At the very least, it will be…interesting! I’ll have to train for sleep deprivation.

Q6: There have been calls for letting 6-hour runners start at either 8AM or 2PM (and if we add a 24 hour race, similar options for the 12 hour people). Should we make that change? 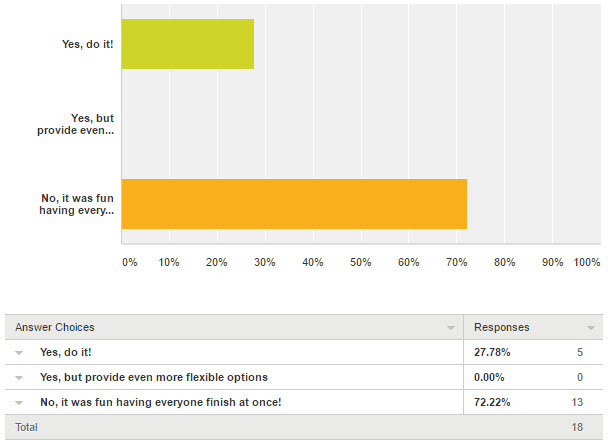 Well, hmm. I’m conflicted here because clearly there is a preponderance of people who participated in 2016 who enjoyed the grand finale finish, as challenging as it was for the timers! As a spectator at that point, I certainly enjoyed it.

But leading up to the 2016 event, I was contacted by several people–I’d say about a half dozen off the top of my head–who asked about an 8 A.M. start for the 6-hour race. When I said not this year, most didn’t sign up (but a couple ended up volunteering!). So I think there is some strong interest in an option for either an 8 A.M. or 2 P.M. start. I suppose we could offer the same sort of thing for the 12-hour race, but I’m not sure how much interest there would be for that option since it would be only overnight.

Most of the comments centered around with the fun of the group finish or concern about overwhelming the timing volunteers.

So, I’m conflicted between making the event more welcoming and accessible, and the fun of the big finish. I think we’ll give the 8 A.M. option a try for 6-hour folks, but not do an 8 P.M. option for 12-hour people (but will be open if I get interest when registration opens). It will be an experiment, and we’ll evaluate this again after the 2017 event.

Q7: The overall race this year was 8AM to 8PM. Should we start earlier, later, or is that good? (A change would affect a 24 hour race as well.) 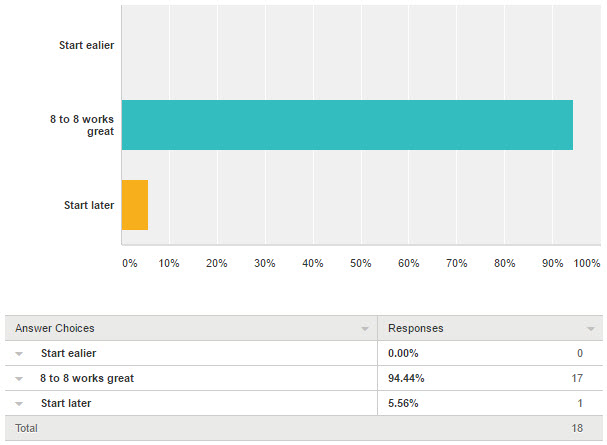 You have spoken! The comments were mostly that 8 to 8 is within a good range, but a couple of people said they mildly preferred a bit later start. Since the consensus is generally that 8 to 8 works, we’ll stick with that. I’m a bit adverse to going too much later since that makes the end of the day later, an issue with the folks who pack and clean up after everything is done.

Q8: We tried to provide an aid station with typical ultra fare, with some special goodies. What should we not provide next year? What was missing that you would love to have for your best ever race? Was the water-only remote aid station adequate?

For the most part the comments were positive about the aid station and volunteers, and that the water-only aid station was adequate. A few observations from the comments:

Thanks for all the great comments!

Q9: Was the help from the volunteers at the start/finish aid station adequate for your needs? Or a distraction? 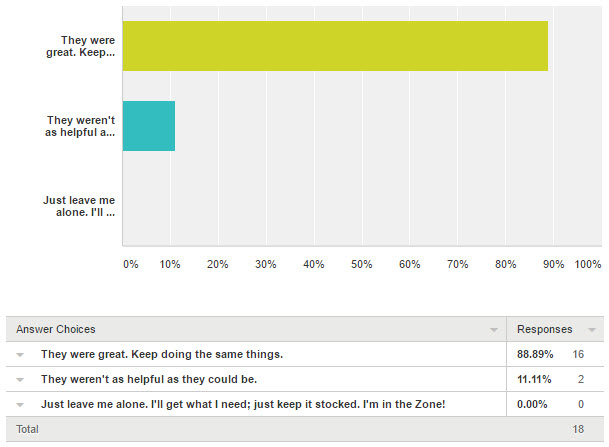 We love our volunteers, and I’m super happy to see that you seemed to as well! Nonetheless, it looks like we can improve a bit. From the comments:

Q10: Please share any other comments you have about how we can make the AETR the best ultra event ever.

Mostly the comments here were enthusiastic, with kind comments about all our efforts to bring another–unique–ultra to the Interior. I and the other volunteers deeply appreciate your kindness!

GREAT comments! Thanks so much for taking the time to complete the survey and share your thoughts. We’re definitely going to make some changes as a result. Please, please, let me know any other thoughts or concerns you have at don@donkiely.com.

See you next year!

Registration is now closed for the 2016 Alaska Endurance Trail Run! We have a strong field of 28 participants, 12 in the 12-hour race and 16 in the 6-hour race.

Participants and volunteers should look for an email on Thursday with last minute details as you get ready for Saturday.

We’ll see you then!